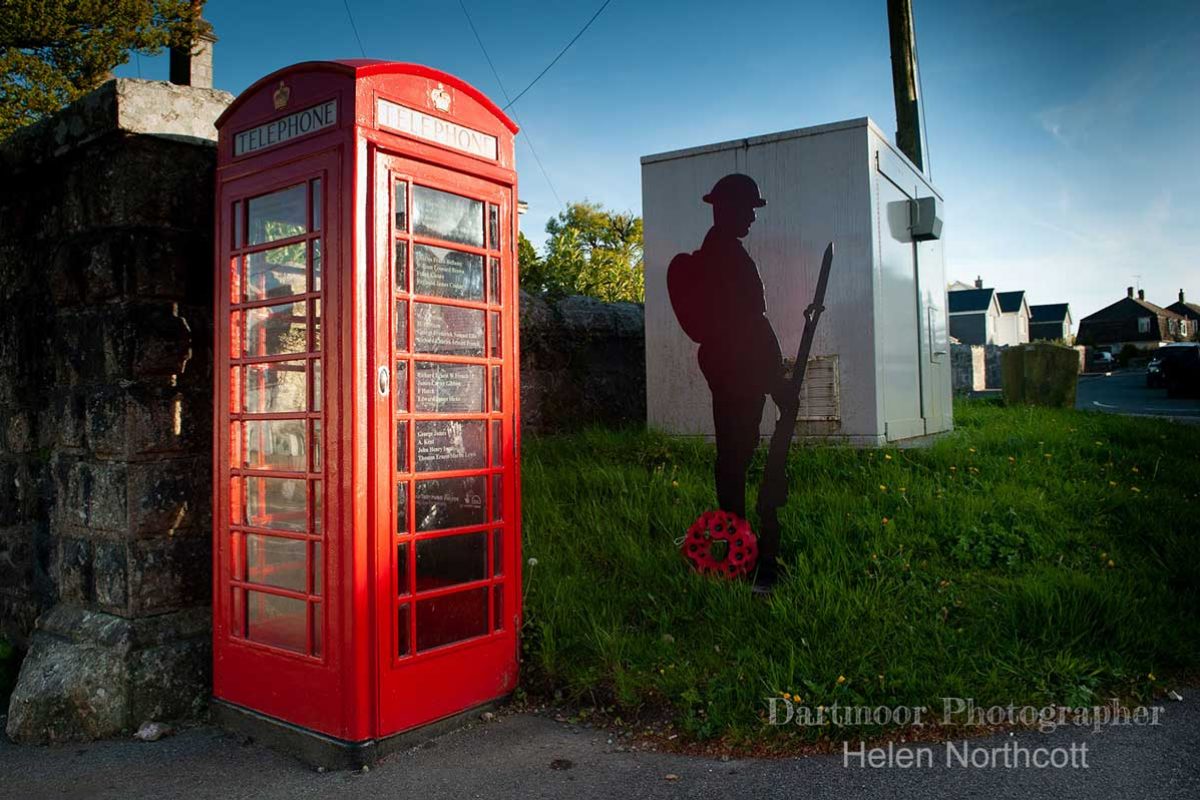 How Dartmoor Villages are Preserving a British Icon

Thank fully in the majority of towns and villages on Dartmoor the original red iconic boxes remained in place.  Sadly, the public payphone has been a casualty of changing technologies and with the rise in mobile phone ownership since mid-1990’s public payphones have seen their usage decline sharply.  BT has a programme to remove little used payphones in locations where there is no social need.  Where payphones are removed BT is offering local councils and communities the opportunity to adopt the kiosks and maintain and repurpose them.

Across Dartmoor many kiosks have been de-commissioned, and the telephone removed but the local communities have adopted them and are making creative use of the spaces.  Over the summer of 2019 I have been recording the remaining red telephone boxes within the boundary of the National Park and have come across a variety of re-purposed boxes including: 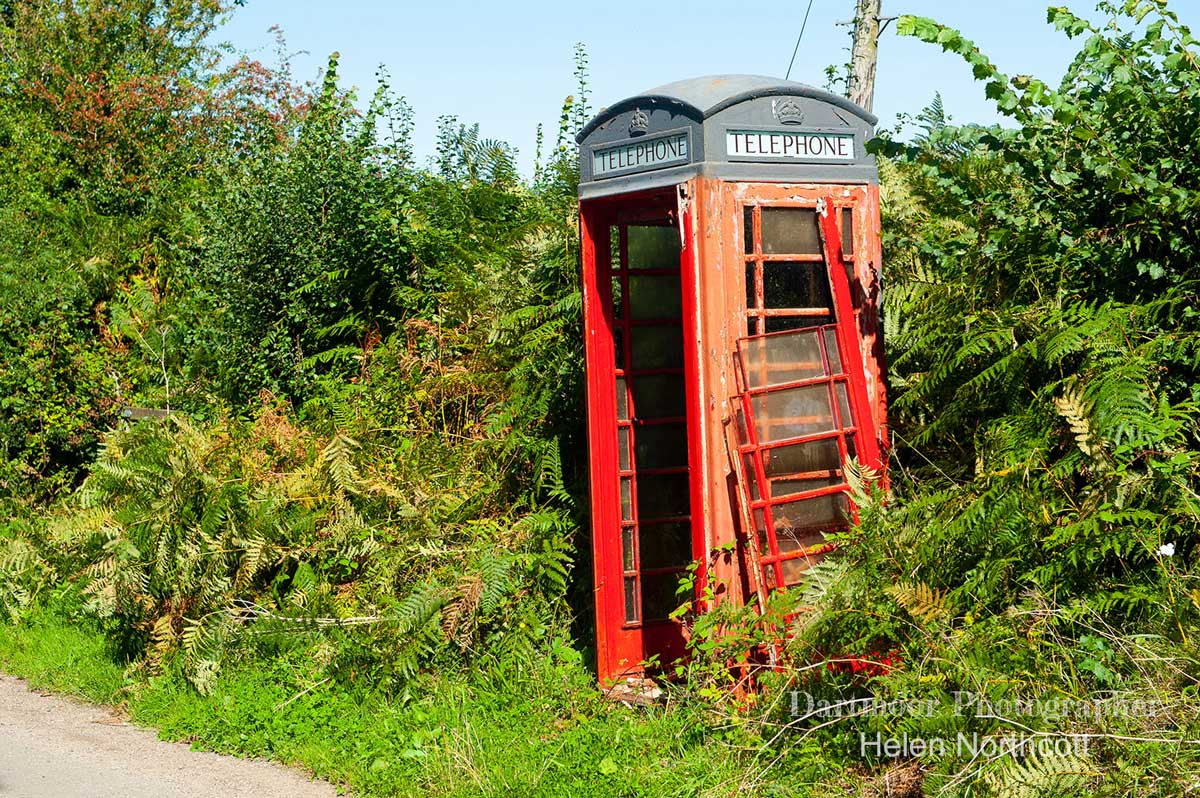 Sadly, the telephone box in Gidleigh has seen better days with its broken door and tatty paintwork.  There is hope though, the telephone box has been adopted by the Village Hall Committee who are currently looking at how best to do it up with the aspiration of making it available as an area for information.

The telephone box in Hennock was adopted by the parish council who have converted the box into a community library.  The library works on an informal basis and I am told it is a very popular and well used amenity for the village. 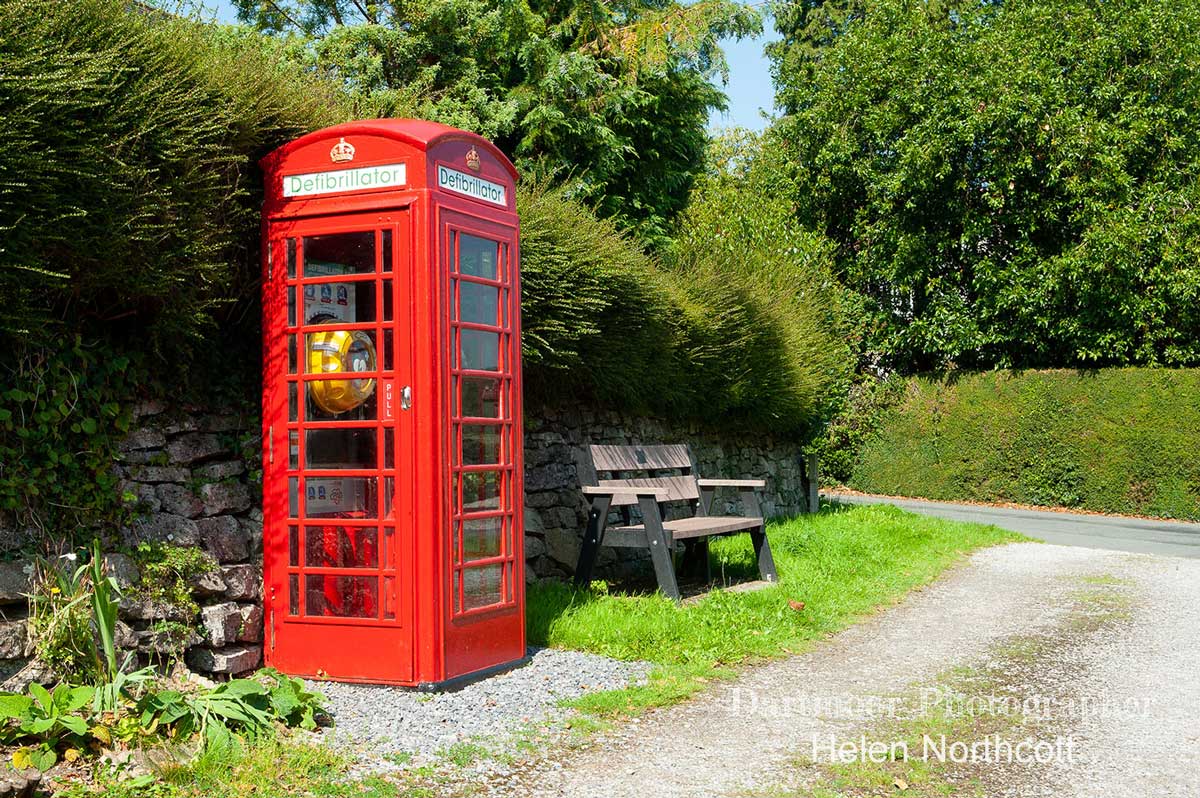 Buckfast parish council adopted four kiosks in 2017 including the red K6 box in Grange Road.  The box has been fully refurbished and now houses a community defibrillator.  The signage on the box has been changed to make people aware of its change of use.  The town council is seeking creative ideas from the public in how to best use the remaining three. 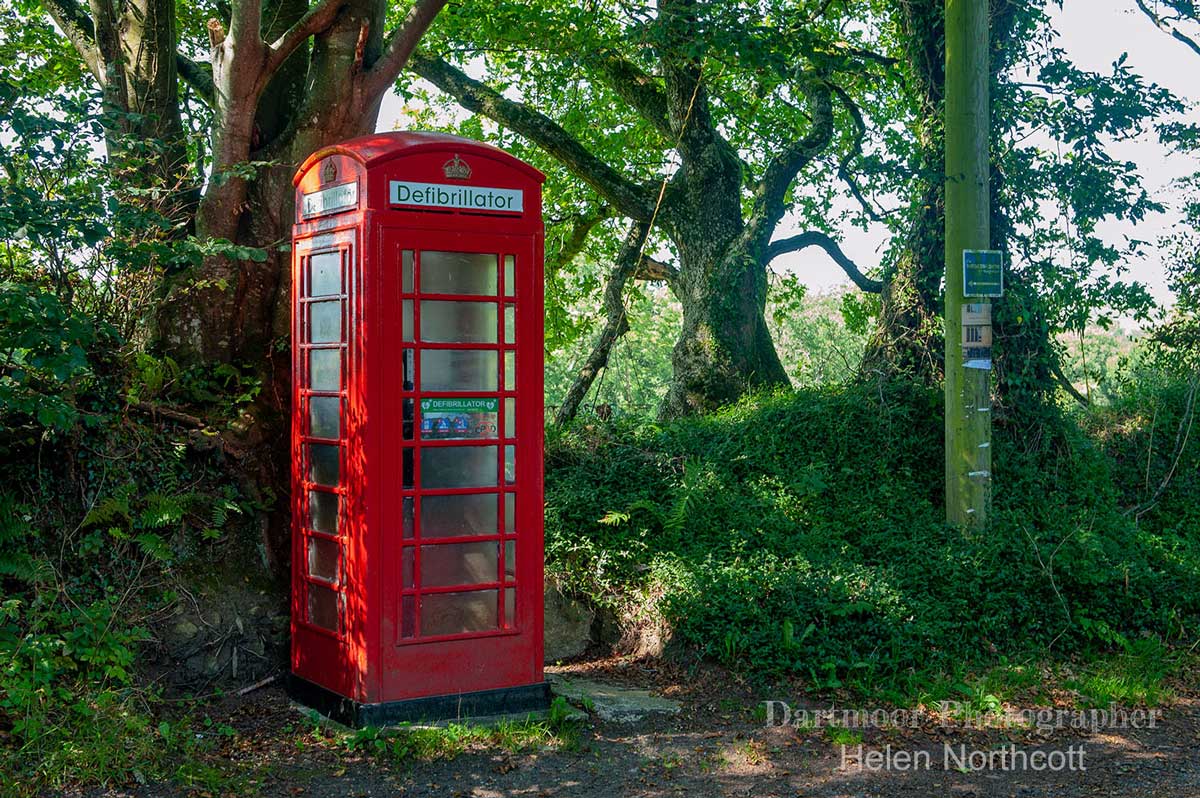 The telephone box at Wonson, a hamlet close to Throwleigh, was in a very bad state or repair when it was adopted by the parish council.  A local tradesman renovated the box and It was decided that the installation of a defibrillator would be the best use as one was needed in the area. Other potential uses for the box had been ruled out because of potential material damage from damp and snails. 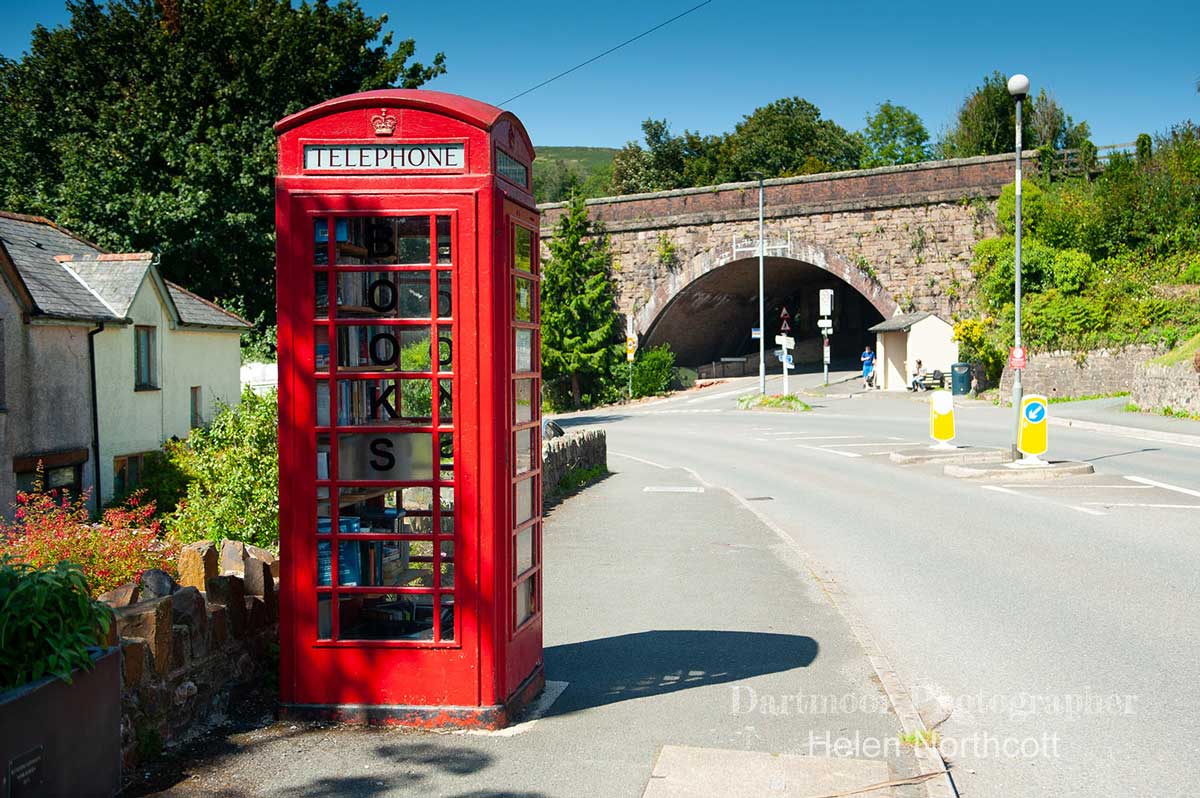 Ugborough Parish council adopted the phone box on the main road through Bittaford in early 2017.  Local residents took on the conversion to create a community space and library.  It is hoped the library will have a new sign in the near future. 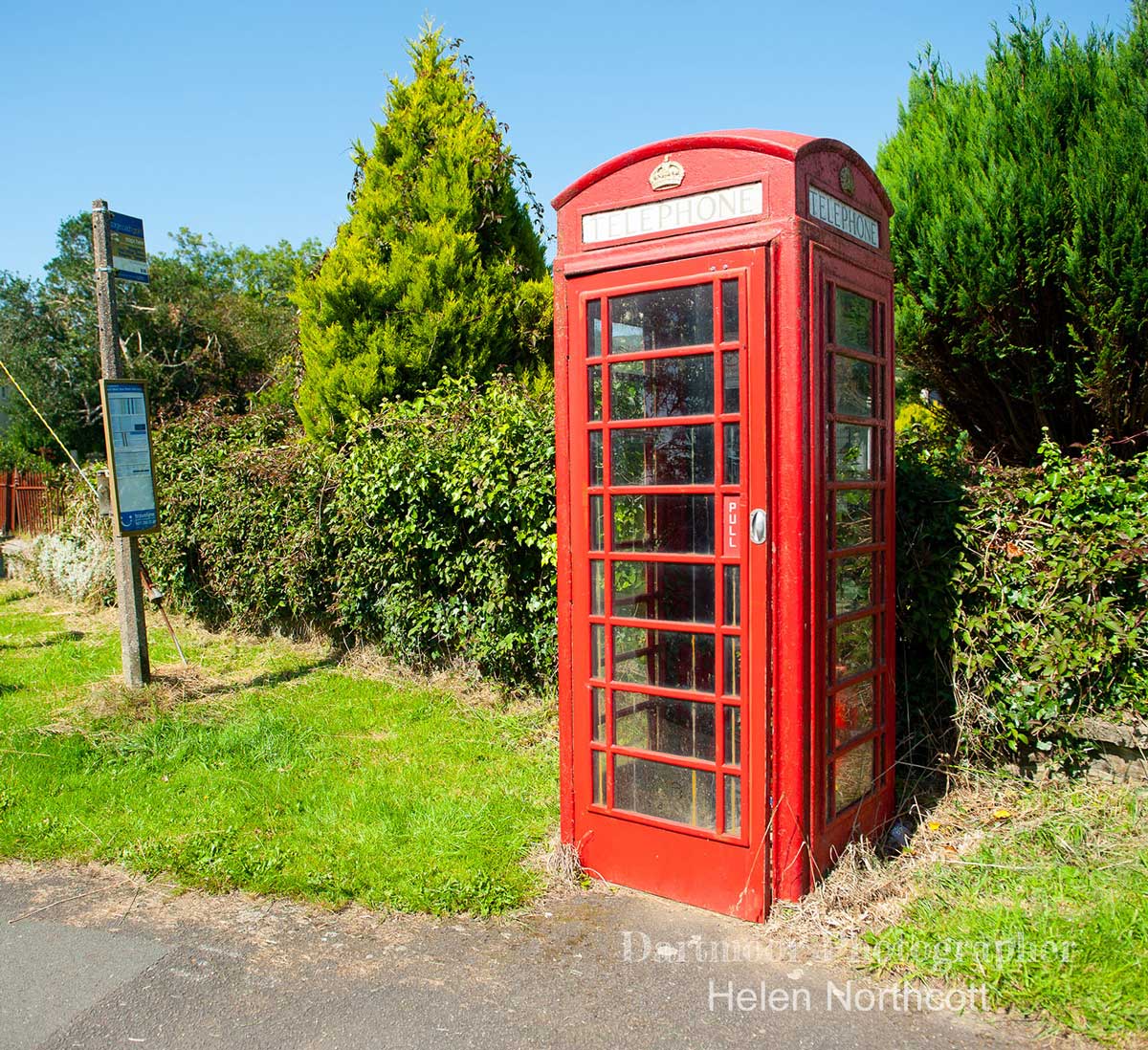 Also adopted by Ugborough Paris council in 2017 the phone box in Wrangaton is currently standing empty but it will soon house a community defibrillator which has been funded by South Hams Communities Together Fund. 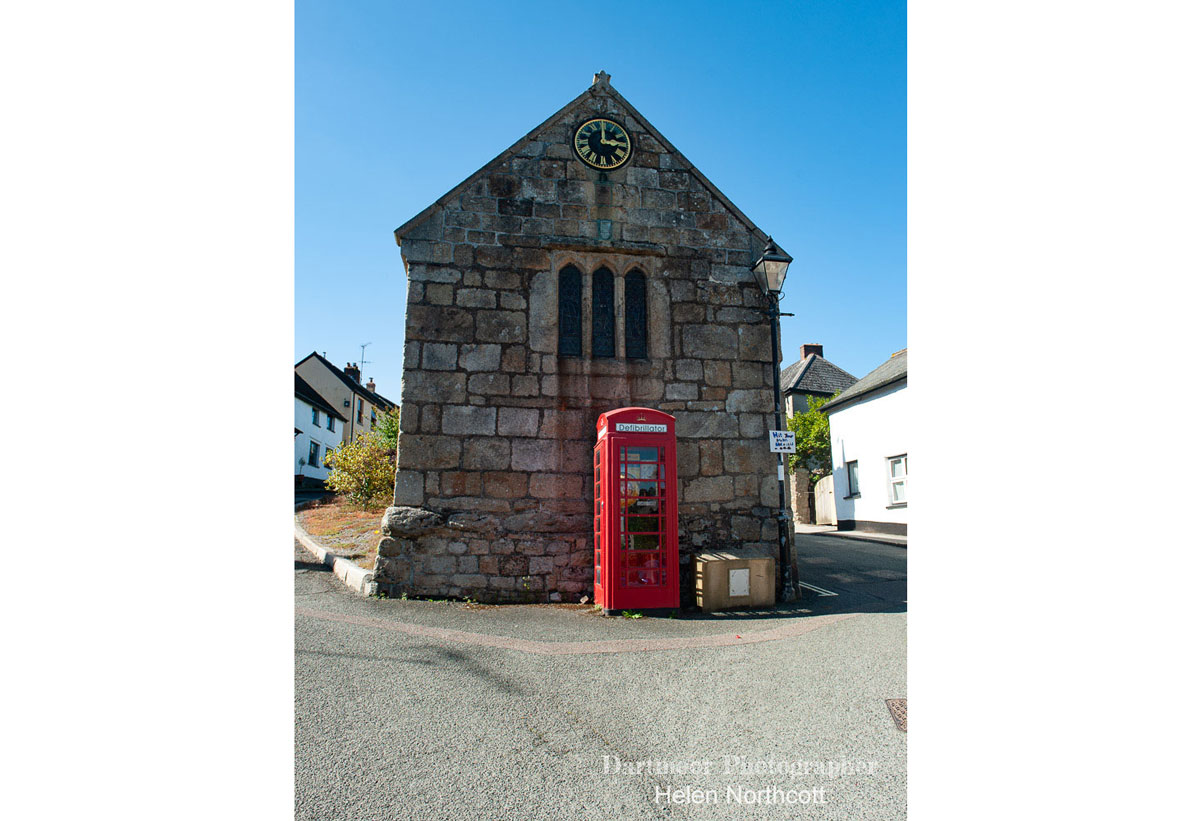 Following positive parishioner feedback the telephone boxes in South Zeal and South Tawton were adopted for the princely sum of £1 each by the South Tawton parish council in 2017, who felt it was important to keep the boxes for the benefit of the community and to use them to house community defibrillators.  The project was funded by local donations, the Dartmoor Charity Speed Shear and a grant from the National Lottery Awards for All which enabled defibrillators to be installed in five locations across the parish. 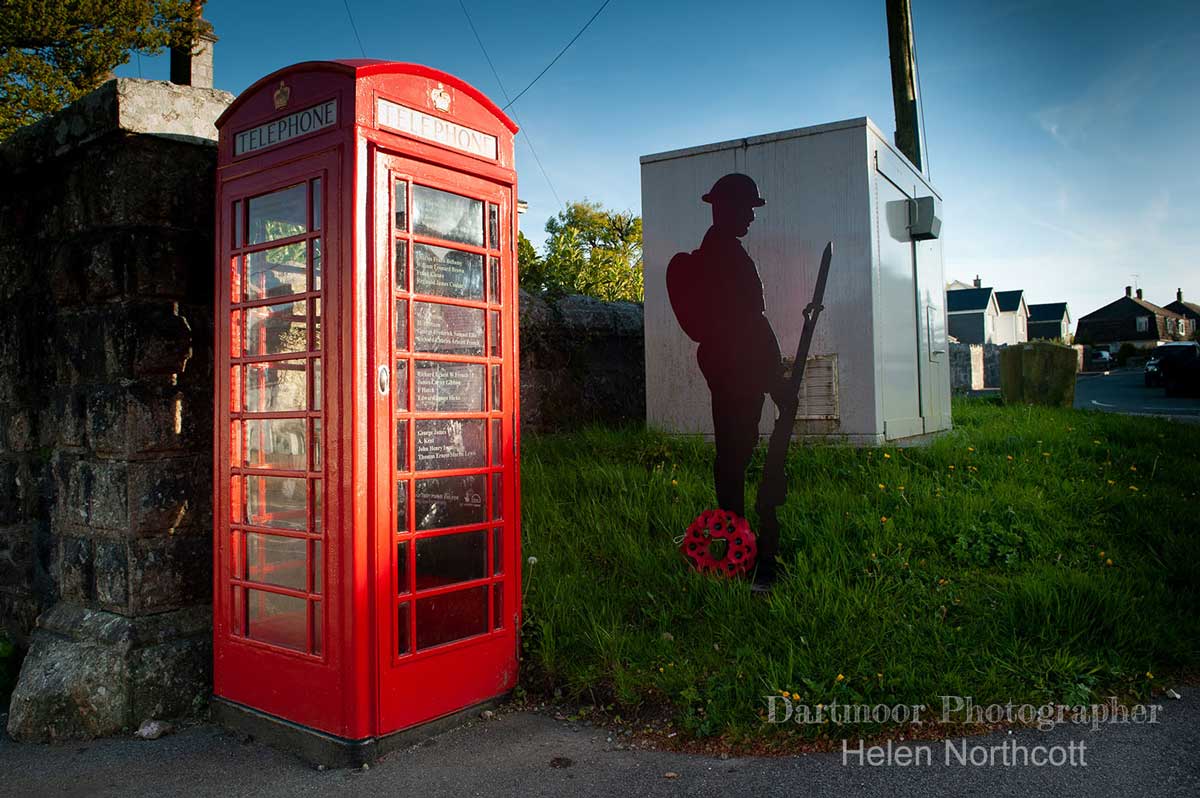 Princetown had two red telephone boxes; the parish council fought to retain one in working order as the mobile signal on the moor can be patchy.  The other was decommissioned and in 2018 adopted by the parish council who have converted the box into a memorial to the local servicemen who lost their lives during the first world war.  The memorial was officially opened on remembrance Sunday 2018. 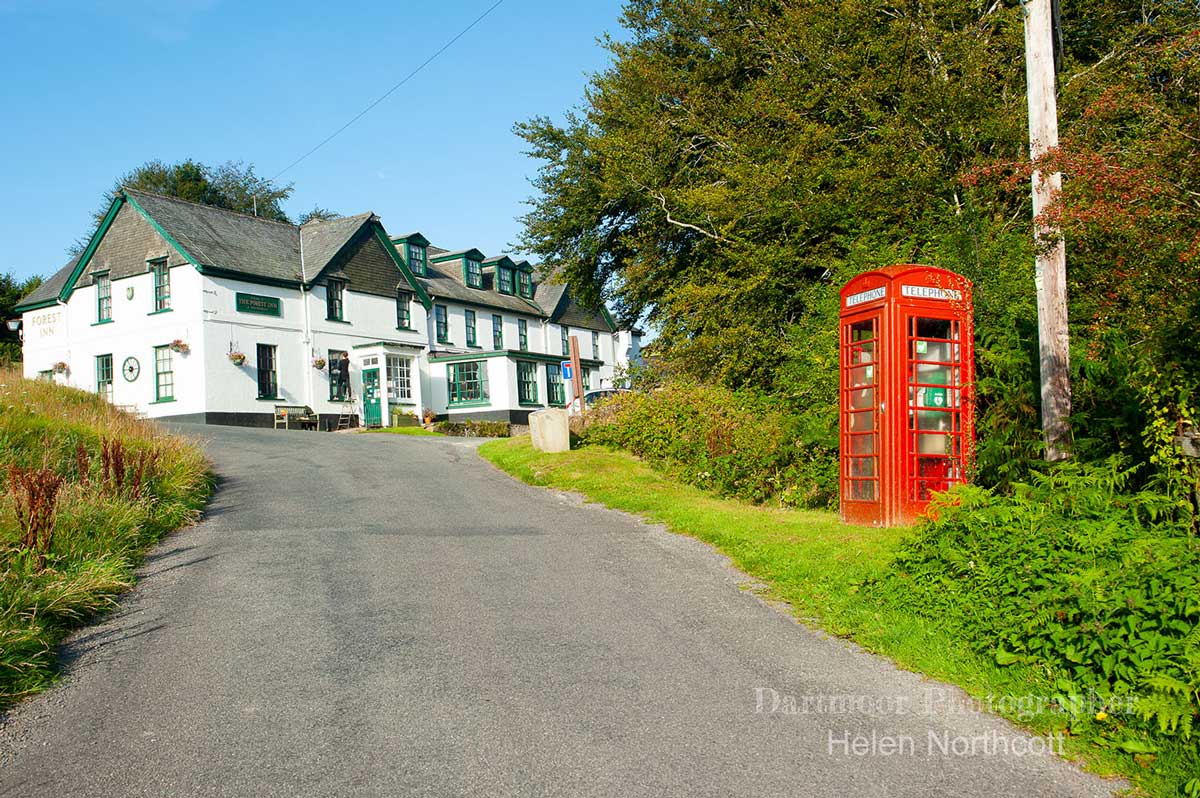 In 2014 Dartmoor Forest Parish council were looking for a site for a defibrillator in the Hamlet of Hexworthy.  The wall of the pub was the originally intended location.  Unfortunately, the business closed so this wasn’t possible.  Around the same time the telephone box became available for adoption, so the parish council decided to use it to house the defibrillator instead.

In the spring of 2014, the telephone box in Belstone was adopted by the Parish Council and who together with the Village Hall Committee raised funds to install and maintain a community defibrillator.  The repurposing of the kiosk provides a convenient waterproof home for the defibrillator which is a useful local asset to help with medical emergencies from the thriving local community and the many people out walking on the moor near the village.

I have always had a great appreciation of the classic red telephone box which I why I started my quest to record the remaining red boxes on Dartmoor, before they disappear forever.  Throughout my journey I was surprised at how many red telephone boxes are still operational and I am pleased to see that so many of the decommissioned boxes have found a purpose that will keep them in our villages and towns for many years to come.

I would like to thank the parish and town clerks of Gidleigh, Hennock, Ugborough, Dartmoor Forest, Belstone, South Tawton, Throwleigh and Buckfastleigh for their help during the research of this post.