This walk starts close to Meldon Reservoir, which is a must see – leaving the car park, the walk follows the route of the West Devon Way along a historic green lane. The return walk follows the Granite Way cycleway (the route of the former London and South Western Railway main line from Waterloo to Plymouth). This is a popular destination for cycling, and bikes can be hired from near Sourton Down. The first part of the walk follows an uneven green lane which can be wet and muddy along much of its length in the winter, particularly after prolonged rain. The cycleway is a surfaced path, and is not affected by the weather.

1. Leave the car park using the gate behind the public conveniences, and go through the gate on the opposite side of the track. Follow the path ahead, keeping forward alongside the wall at the first signpost (signed to Sourton). Go through the gap at the top next to the old gatepost and continue ahead, keeping close to the wall. Pass through a gap in the stone wall, still keeping parallel to the main wall on the right. The open land here is know as South Down. The wall on the right marks the edge of mainly 19th Century agricultural enclosures taken from the open moor.

2. Where the wall turns sharp right bear right at a marker post to a signpost by a wall. Go ahead here, next to a wall, keeping it to your right (signed to the Moor and West Devon Way). Go through the gate ahead onto a walled green lane. This is the route of the King Way, the medieval highway between Okehampton and Tavistock before it was superseded by the new turnpike roads in the 19th Century.

3. Go through the gates at the end and follow the wall on the left (signed for West Devon Way). The prominent rocky hill ahead and to the right is Sourton Tors. Behind the Tors was the 19th Century experiment of the Sourton Ice Works, consisting of a series of ponds fed by a spring which provided ice in winter. The ice was then compressed and sent to fish merchants in Plymouth. However, the scheme only lasted from 1875 to 1886 because of ice melting en route and a series of mild winters.

4. Follow the wall to a prominent granite post by a low bank. Turn right here, alongside the bank, for approximately 100m to a gap in the bank.

5. Turn right here onto a grassy path, going right at the fork almost immediately, heading roughly for the prominent road bridge. This open land is Prewley Moor; it gives wide views over a large area. On a clear day, the rugged outline of Bodmin Moor is clearly visible to the left, with the smoother profile of Exmoor on the horizon to the right. The road bridge is at Sourton Down, the highest point on the A30 between London and Lands End. Continue downhill, aiming for the bottom right corner of the open moor. Nearing the bottom, now aim for the obvious gap in the embankment ahead.

6. Go down to the cattle grid by the main road and then through the gate on the right. Follow the tarmac path ahead. This is part of the Granite Way – in turn part of the National Cycle Network Route 27 between Plymouth and Ilfracombe. Continue on the cycleway.

7. This is a former railway line, the route of the London and South Western Railway main line from Waterloo to Plymouth. This section was closed to rail traffic in the 1960’s, although part of it was used as a haulage road for lorries during the construction of the Meldon Reservoir in the early 1970’s.

8. The wide area by some seats is the site of Meldon Junction, where the line to Plymouth diverged from the line to Bude, Padstow and North Cornwall. This line, once famous for its ‘Atlantic Coast Express’ trains, left teh main route back and to the left.

9. The route continues ahead on to the old railway through another cutting, which then dramatically opens out onto Meldon Viaduct. The Viaduct was built for the Plymouth line in 1874. It is unusual in being constructed of wrought iron. It is 175m long and carried the line 36m above the valley floor.

10. At the end of the Viaduct turn sharp right, and back to some steps. Follow the zig-zag path and steps downhill (bearing right at the fork in the path) under the viaduct to the road at the bottom. Turn left at the bottom, forking immediately right onto a track (signed to the public bridlepath to Meldon Reservoir). Go through the gate at the end.

12. Follow the path uphill to a field. Go diagonally left across the field and follow the path which continues uphill next to a stone wall. Go through the gate at the top; the car park is immediately to the right. 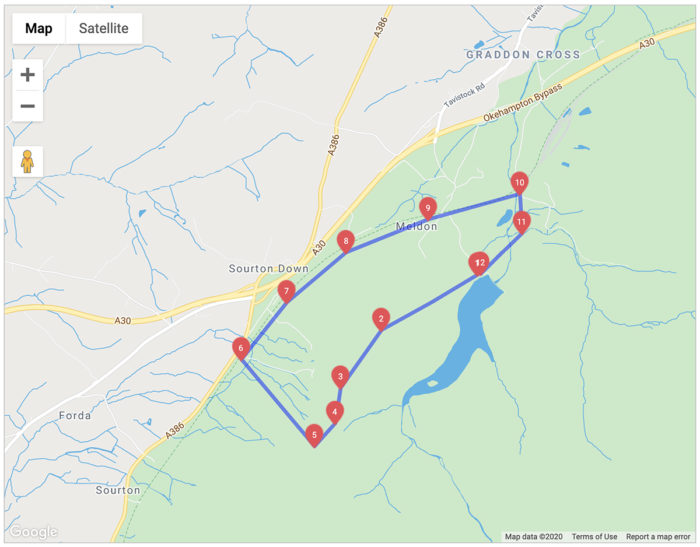