This is a stunning walk, taking in fantastic moorland fringe scenery, with views of the high moors, and passing under the striking Meldon Viaduct. The route has it all, with moorland, woodland and riverside sections. Surfaces will generally be uneven, and can be wet and muddy, particularly after prolonged rain. There is a long steep climb from Okehampton past Okehampton Camp, before a steep then steady descent back to Okehampton. It is well worth the effort of the climb for the rewards of the views and experience of this walk.

1. Leave the Countryside Information Point by the YHA and turn left up the road. At the top continue up to the track signposted ‘footpath’ and through the small gate next to Heathfield House. Bear left to the iron fence at the top and alongside the A30 to the footbridge.

2. Cross the bypass and at the far side turn right alongside the fence.

3. After 100m, on reach the gorse bushes follow the path left and uphill to reach a road.

4. Continue up the road ahead. Look out for a granite cross (Fice’s Well) on the right here. It marks the site of an old spring where it is said young people would come at Easter to discover the likelihood of marriage in the coming year.

5. Keep left of the Army Camp as you descend to a cattle grid. The original Artillery camp was temporary and under canvas. The first permanent camp was set up in 1892. Today it is still much used as a base for live firing – red flags and lamps will be shown if this is happening – make sure you stay on the described route.

6. Cross the cattle grid and turn right along the surfaced track. To your left are the two highest points on Dartmoor, Yes Tor (619m, or 2,030 ft above sea level) and, just behind it, High Willhays (two metres higher – the highest point in England south of the Peak District).

7. Where the track bears left away from the wall, take the unsurfaced track bearing to the right, to continue alongside the stone wall.

8. Where this in turn bears left towards a hilltop, leave it and keep ahead, next to the stone wall. The area over the wall on the right is the site of scattered farms and fields of medieval times. There are no visible remains.

9. Follow the wall ahead until it descends to the second right angle. Meldon Quarry to the right here, was worked since 1895 for hornfels, a very hard rock. The line was originally opened by the London and South West Railway to provide track ballast, and later also for roadstone.

10. Leave the wall at the second sharp bend and continue straight ahead down the grassy path into the valley in front. Note the spoil heaps and other remains of a 19th Century copper mine next to the stream.

11. At the bottom follow the track to the right, alongside the stream (Red-a-Ven Brook) and continue downhill to the old quarry buildings. (This is a private track, but access is allowed by kind permission of the Parish Council).

12. The quarry here operated from the 1880s to the 1970s for the extraction of granulite, a form of granite that was used at one time to manufacture glass on this site. On reaching the old buildings, head straight over the track on a grassy path downhill. Fork right after around 100m to follow a grassy path towards the Viaduct. Follow the grassy path through an area of gorse and over a stream, then on to a wooden gate. Note the lime kiln next to the gate here – lime from here was probably used to fertilise the soil.

13. Turn left at the quarry access road, under the viaduct. After 100m, turn right on a woodland path (signed Public Bridlepath). The viaduct was built by the London and South Western Railway in 1874 to carry the main line to Plymouth and North Cornwall. The wrought iron structure is 165m long and stands 36m above the valley.

14. Follow the path to its end ignoring signs to Meldon Reservoir.

15. Where the path reaches the road, bear right to cross the bridge over the A30, then bear right at the first track (signed Public Bridlepath). From here, the route follows the waymarked West Devon Way to Okehampton.

16. Follow the track, bearing right and following signs through the farmyard to a gate. Through the gate, keep to the left side of the fields.

17 – 18. At the end of the fields, pass through a metal gate, and cross a stream to reach the golf course. Keep ahead, next to the bushes, following a faint path which becomes a clearer track and then leads to a road. Take care here – beware of golf balls, and be respectful of golfers.

19. Continue ahead on reaching the road.

20. Follow the road for around 350m, then fork left into the woods following the West Devon Way signs.

21. These woods are part of Old Town Park Local Nature Reserve. On emerging at a grassy area, bear right past a bridge, along a boardwalk to a gate. To visit Okehampton Castle cross the footbridge and stile here, and bear left along the road – the Castle is 100m to your left. The castle was established within a few years of the Norman Conquest. Strategically situated in the middle of Devon, it provided a symbol of power of the nobility over the local population. However, it is thought the castle has never been besieged or involved in any open warfare. Today it is owned and managed by English Heritage.

22. To continue on the route, pass through the gate and follow the riverside path. At the end of the path, continue along the road ahead to its end.

23. At the roads end, turn left for the town centre, or to continue on the route, turn right. Pass Station Road then bear right into Simmons Park. The park was given to the town by local man Sydney Simmons in 1907. Note the Swiss-style Chalet Treloar, named after the Lord Mayor of London who conducted the opening.

24. Keep to the main path alongside the East Okement River.

25. At the end climb the steps back to the right then turn left up the steps at the junction. Keep climbing to the top then continue up the path ahead to the road. Turn left to the station.

26. To reach the starting point, pass under the bridge and turn left. 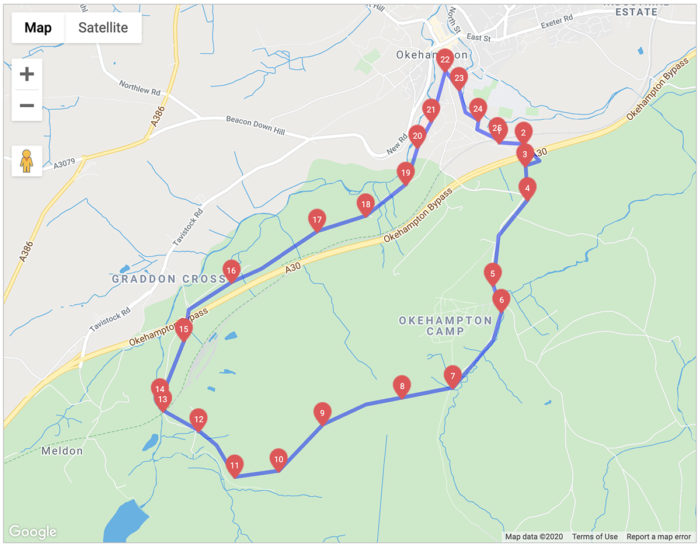